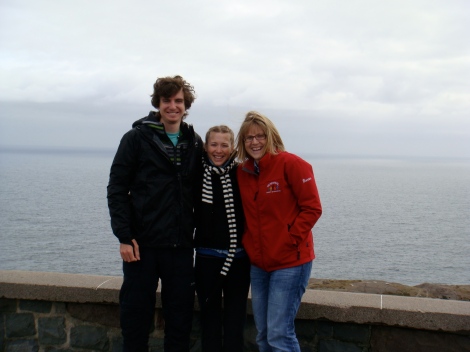 Ed, myself, and Jacqueline (my sister) on the top of Signal Hill

For those of you who don’t know, Canadian’s often refer to Newfoundland as “The Rock.” I think the nickname comes from the geology, since there are rock outcrops pretty much everywhere; however, after spending Canadian Thanksgiving in St. John’s, the capital of Newfoundland, with my sister, I began to think maybe the nickname held a little more weight than the rocks.

We arrived in cloudy, misty St. John’s after a four hour plane ride from Ottawa.  It’s still strange to think that my sister, who teaches outside of St. John’s in Little Hearts Ease, is almost closer to London, England than she is to my parents a few provinces away in Ontario.  The four hour plane journey, however, gave some significance to the experience because when we landed, we may still have been in Canada but it felt like a whole new world.

The longest crosswalk ever! Five or 6 streets merge at this busy intersection and the crosswalk goes right through the middle.

We rented a house perched on the side of the main harbour and it wasn’t long before I set out running to explore.  Over the few days we were visiting, I ran across most of the central and harbour area and I was constantly delighted by the city.  Not only was the landscape something to behold with its jagged rocks, stunning ocean bay, and steep roads, but I was loving the whimsical road names like Hipditch Hill, Moo Moo’s Corner, and Hill ‘o Chips, that Newfoundland is famous for.  Add the grandeur of the working harbour ships, the constantly changing weather, and longest crosswalk ever and you’ve got yourself a run on The Rock. With one exception… 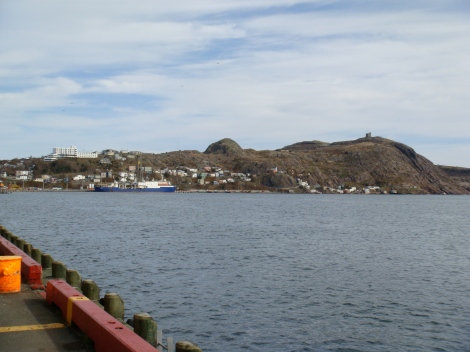 After years of hearing my sister talk about how steep Signal Hill was, I was determined to run to the top.  She wasn’t kidding though. The 1.5km climb has an average gradient of 7.7% and a maximum gradient of 16%, so it was a heck of hill.  The hill is a worthy destination for cyclists and runners and it even has a long interesting history, including being the sight of the first transatlantic wireless signal transmission.

The steepest part of Signal Hill

Off I went to conquer my sister’s challenge, determined as ever, like any little sister would be.  I initially did get a little lost on the winding roads of St. John’s and eventually asked someone for directions.  The man said, “Go straight and then turn left. Then go up. And keep going up.”  He was friendly and he definitely knew I didn’t know what was in store.  I was able to tackle the run and enjoyed the challenge, especially since it was another great climb to check off my list.  I was rewarded with a great panoramic view (albeit grey and misty) of the city, it’s harbour, and the ocean.

Running missions completed (touché Jack!), we set out to explore the rest of the city which included a trip to Cape Spear, the most Eastern part of Canada; a walk along the harbour; and, of course, a beer at the Duke of Duckworth on George Street, which is the street with the most bars per square foot in North America. 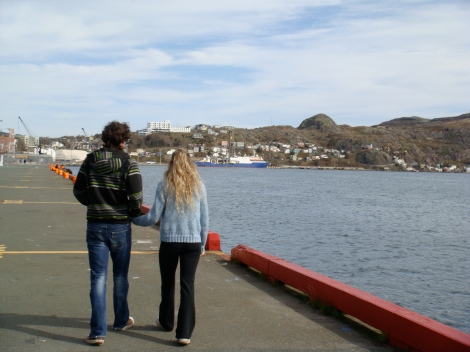 On the pier downtown St. John’s

The Duke on George Street

I guess opposites attract because against the backdrop of the greyest sky and some of the dreariest weather is such a vibrant, friendly culture and I got the feeling that Newfoundland is one of the best kept secrets in Canada.  “The Rock” is the foundation of what truly makes Canada Canadian: down-to-earth, honest-to-goodness, friendly people…who just happen to be stuck in bad weather most of the time.  On that note, my whole experience of everything Newfie can be summed up by what the sign said at Cape Spear: “Canada begins here!…or ends, depending on which way you are going.”