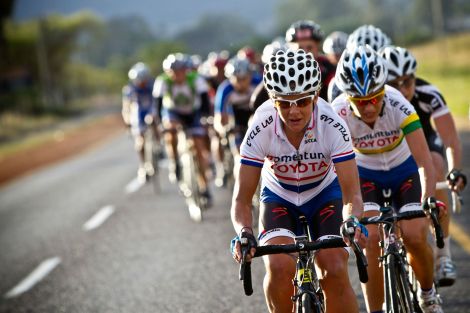 It was a little easier to get at 4am on Sunday for Die Burger Cycle Tour knowing I would have the privilege of lining up with some world-class athletes:  Sharon Laws, British National Road Champ; Jennie Stenerhag, former Swedish National Champ; Anriette Schoeman, a well-known successful SA pro; and Ashleigh Moolman-Pasio, who I just interviewed about winning double gold at African Continental Champs.  Comparing the rankings and grand tour results of Laws and Moolman-Pasio to the world tour elite men, it would be the equivalent of racing with the likes of Robert Gesink, Michael Rogers, Maxime Monfort, or Janez Brajkovic.  While the all-star cast was lined up across the front of the bunch on the start line, probably thinking race tactics, I was thinking about what a great opportunity it was for us local amateur women to race with such accomplished strong riders. Then again, staring at the legs of Olympians waiting for the start gun was a little nerve-racking.

With the start only about 1km from the big climb of the day, it felt like about a minute before I was going flat-box to stay in the bunch.  Old Hellshoogte Road is a winding 3.6km climb that averages 4.4%.  My experience felt more like 8km at 10% but I was determined to stay with the pro-ladies as long as I could.  After the first few corners I had already slid back to the middle of the pack but I could still see the stripes of the national jerseys who were setting the pace.  I tried to keep up and keep my position but, about half way up the climb, I started to suffer.  Knowing I had way more to give, I quickly shifted and picked up my cadence.  To my disbelief, I could still see the front ladies and I was still in contact with the strung out peloton.  With about 1km to the top, I cracked but, not knowing the climb well, I convinced myself it was only 2 more corners.  Four corners laters, pulling a shamefully Thomas Voeckler-style pain face, I was hurting. I was standing quickly, changing gears, pulling on my bars, and doing everything I could to crest in contact of the bunch.

I turned the last corner onto the connecting main road to see the lead bunch summit about 10 seconds in front of me.  I knew it was “now or never,” so I gave everything I could to the top.  Frustratingly close, I set about chasing with a few other riders but we just couldn’t make contact. Our group of 4 eventually merged into a bunch of 50 and after about 10km of chasing, we hit a series of corners that broke focus.  Afterwards, we settled into a good tempo pace and awaited the decisive big rollers towards the end of the race. 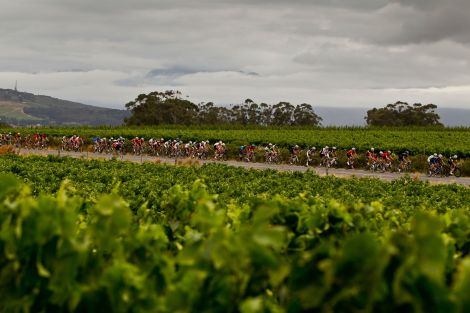 When we finally turned back towards Stellenbosch, there was 10km to go and 2 big rollers between us and the finish line.  The bunch scattered on each climb but I fought my way over both and managed to stay with at the front.  Finally, the last corner of the day, a sharp left onto a rise, was upon us.  I had the finishing straight all mapped out in my mind but as I turned the corner to sprint up the small rise, lack of experience left me caught out in the strong crosswind and I went backwards fast!  I struggled to get back into slip and by the time I did I was off the back of my group.  No matter at this point, I gave it all to line and took 7th overall in the elite women’s category.

Only 10 minutes down from 2 Olympians…a win in my book!

In a photo finish, Laws took the win with Moolman-Pasio and Jennie Stenerhag taking 2nd and 3rd respectively.

3 responses to “An All-Star Cast: Lining up with the Pros at Die Burger”