I’ve never wanted to quit a race before.  I’ve thought about it maybe for a minute or two but never seriously considered pulling brakes. Yesterday in the Tour de PPA, after hitting the cement and being dropped a thousand times, I had a major sense of humour failure as I watched my speedometer drop below 10km/hr and the distance creep by even slower. The only thing that kept me going was the fact that my car was parked at the finish venue.

After such a great last race, I was really keen to compete again but, to be honest, the day was doomed from the start. Nothing was going right from when I woke up at 4am and, on top of being uncharacteristically disorganized, it was raining at the start and the wind was pumping.

I started the race colder than normal and the power climbs in the first few kilometres were already causing some pain but I was feeling good for the big climb of the day, Vissershok, about 10kms down the road.  Just as we started the steep part of the 2.3km climb, someone let a split go so I jumped to chase.  I didn’t have the legs to go all the way in the crosswind so I settled into a tempo pace, dragging a long line of riders behind me in the gutter.  When a gust of wind pushed me to the very edge of the road, the rider behind me, who was sitting cross wheeled, hit my back wheel, forcing it off the road.  The road wasn’t flush with the dirt shoulder and my wheel didn’t make it back over the high edge of the road.  Then, cement.

I remember watching my sunglasses tumble off my face and suddenly I was sitting sideways on the pavement looking at my bike. After being told, in much worse language, “that women can’t ride bikes,” I realized I was tangled in my frame and had a juice bottle skewared on my back wheel valve. Amid tearful sobs with red juice dripping down into my socks, race organizers and a fellow female competitor, Emily Clarke, came to my rescue. 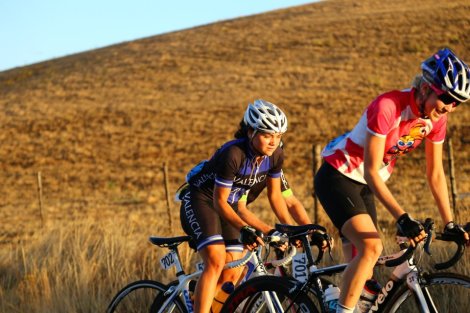 After a few more tears and bending my shifters and bars back to almost straight, off Emily and I went chasing up the rest of the climb.  Thanks to adrenaline, I found good climbing legs and we latched on to a few more riders.  We kept picking up riders and I was feeling quite good so I urged the group to pick up the pace and get organized.  Then, I got dropped.

Annoyed I pretty much dropped myself, I tried to reconnect but I was totally flat.  I spotted a small group behind so I rested until we merged.  As I slowed down to save energy, pain came flooding through my body. Adrenaline gone, my entire left side was aching.  My elbow was bleeding and I struggled to grip my bars. My lower back was in spasm and my legs were almost refusing to turn. With no kick left, I dropped from the group.  And then the next group. And then the next. And the next.

Pretty soon I was solo but then another rider, who’s race was also over, decided to stay with me for the rest of the race, no matter how slow I needed to go. The wind kept getting worse and for the last 30km the conditions were utterly apocalyptic.  My sense of humour finally abandoned me at 10kms to go when I was barley able to push first gear over the smallest of climbs. The wind never relented and it was honestly the longest 10km of my life.

Emily, in the blue Valencia kit, taking 3rd in the ladies (second from the right).

After finally reaching the finish line and washing down a painkiller with almost a litre of coke, I was so pleased to see Emily, who had sacrificed her race for me, called to the podium for 3rd! That brought my sense of humour back. Then again, that might be the sugar and ibuprofen talking.

One response to “From High to Pavement Low”

Anyway you look at it... #upside 📷 @jamesmitchell5
Out of the bars type of view. #sunrise
Sunny, sweaty, sweet. #run 📷 @jamesmitchell5
Chasing rainbows. #dreamer
Trashed. #recoveryday
“I learned that I could be a giver by simply bringing a smile to another person.” —Maya Angelou, “Letter to My Daughter” 📷 @jamesmitchell5