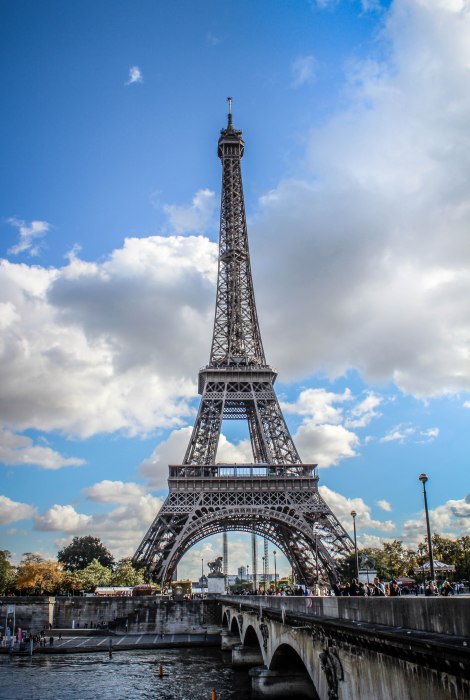 Paris has always held a special place in my heart. Between the iconic landmarks, delectable sweet treats, high fashion and promise of romance, Paris is what my little girl dreams were made of.  Add in thousands of kilometres on my bicycle since those 10 year old fantasies and I was now also heading to Paris as cyclist excited to place my feet on the cobbles of the Champs-Élysées.

I can’t tell you how excited I was to go to Paris! It wasn’t exactly the dream trip, a 12 hour layover between flights, but I knew this was just the first time I would be in Paris, not the last. We touched down in France after an 8 hour flight from Canada and headed straight down town. I was pretty exhausted from the trip over but as our bus turned on the Champs-Élysées and I saw the Arc de Triomphe, I was instantly filled with jittery excitement. Somehow our bus navigated through the crazy traffic circle that surrounds the Arc and I hopped off, giddy with anticipation to get out from behind the glass of the bus window. 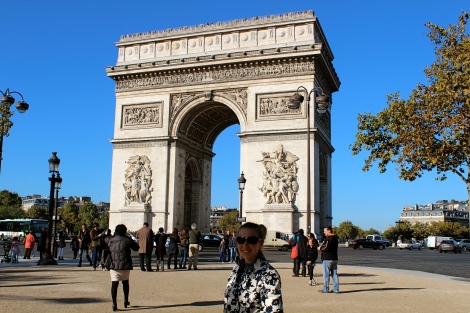 On the back drop of a blue sky, the Arc de Triomphe looked truly picturesque. We walked around the giant structure, appreciating the legacy of the soldiers and battles engraved on its walls, but the real treat was the view from the top. After climbing the 284 steps, I felt like I was standing at the centre of Paris. The view of the city was breath taking but so was the traffic below! 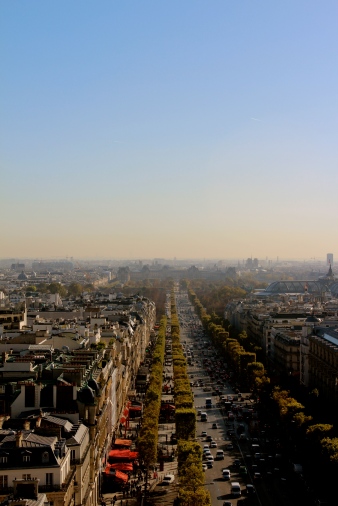 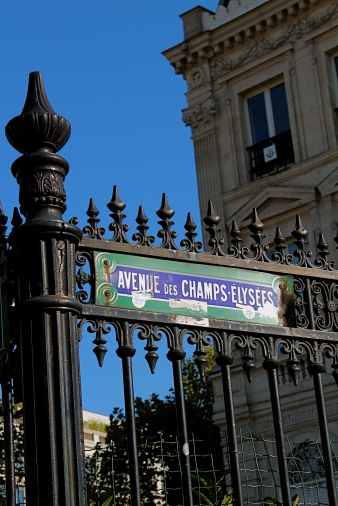 We quickly recognized exactly where the Tour de France races, even recognizing the roof top garden we admire every July watching the television coverage. After climbing down, we headed toward the Eiffel Tower but not without first stepping across the cobbles stones of the Champs-Élysées where so many famous riders have raced before. The famous annual criterium seems to be forgotten in daily hustle and bustle but to think that such a busy place shuts down for a bike race shows how much they cherish the event.

View from the Eiffel Tower

Next up was the Eiffel Tower. The iconic building has been calling me to Paris for what seems like forever. Well, me and about a thousand others. If there is anything that could kill the romance of Paris, it was standing in a queue for two hours. Thankfully, it was a beautiful day and we were willing to take the stairs in a trade off for a shorter line.

Take it from me, skip the elevator. The stairs wind up one of the legs of the Eiffel Tower and, while the elevator rushes up, on the stairs you have time to take in the building. Or maybe that’s just my athlete mentality telling me the view was better after working for it! The view from the top was, of course, one to remember but so was the view from the park below where we could appreciate the Eiffel Tower in it’s entirety.

Eiffel in the afternoon.

With the airport starting to nag for our return, we headed back to the toward the bus. Walking along the Seine, hand-in-hand under the sun with the Eiffel Tower in the background, it was hard not to feel romantic.

One response to “Paris”