We were no more than thirty minutes into the week. Granted it was a Total Immersion Open Water camp but the question wasn’t just about the distance. The blunt question was also rooted in the week’s expectations and everyone’s experience level. There were a mix of swimmers, some swimming almost daily their whole lives, others who had learned mere months ago, so there was a complete range of emotion from excitement to worry on everyone’s faces. Some gave conditions to their possible participation, others said they would just do the optional half distance, a few didn’t even seem fazed by the task like they had been asked to pick up some milk. Me? I was in.

I had never swum that far but I knew I could do it. I was determined enough and brazen enough to agree to the whole 5km right away because I knew I could just power through it. But I knew powering through the final swim would be the easy way out. This week wasn’t about what I did, it was all about how I did it.

Back to school in the pool.

Our busy schedule included several theory lessons on dry land covering speed, training techniques, planning for open water swims, and analysing our video footage, but the 25 meter pool made a better classroom. Each morning we took to the lanes to perfect our glides, skates, switches, and kicks. Our coaches, Marjon from the Netherlands and Joseba from Spain, showed no end of patience as they enthusiastically dished out the same advice over and over again. Turns out I wasn’t the only one who needed to “hoooold” my front quadrant (arm) and “loosen” my head (or, much to our entertainment, “lose my head” in Spanglish).

Most of us also seemed to have a stray limb, an appendage that seemed to have a mind of its own. Katie, the windsurfing mum with a PhD from Oxford, had a left arm that always wanted to go right; Peter, the Dutchman with cycling stories from around the globe, seemed to have no control over his left foot; and, me, I just couldn’t seem to control the entry of my stubborn left hand. During collective video analysis, I couldn’t help but giggle at myself as I realized there was a gap between what I thought I was doing and how I was actually swimming.

If the pool was about adapting our stroke, the ocean was about adapting to the environment. Between the waves, salt, fish, wind, boats, current, wetsuits, and people, it became quite clear open water required a whole new skill set. I had trouble orientating myself during the first open water session and my stroke went back to old habits; suddenly, I wasn’t feeling so confident about the five kilometres.

The next three open water sessions we covered sighting, breathing in rough water, wetsuit swimming and we were introduced to group and sync swimming. One session was also based around triathlon-inspired skills such as bunch swimming, bunch starts, run-in entries/exits and dolphin dives. All the while our coaches gave us different focal points and feedback for stroke correction and then, an hour later floating off shore in what felt like big swell with a strong current below me, I realized how comfortable I was in ocean. The past few days had given me the awareness and the skills base to swim more confidently in open water. I hadn’t felt like I was making progress yet but the mental switch made it clear that change was happening.

On the final day, as the sun was rising, we all gathered at 7am for breakfast before the final challenge of the course. It was 5km day. As Gavin, the hilarious Brit spending semi-retirement travelling and training, jokingly “got in the zone,” the rest of us inflated our safety buoys, got into our small groups as we listened to the swim briefing. In Spanish, translated only by hand signals and head nods, my partner Karmen and I agreed to start slow and, her being faster, for me to sit on her feet.

The start: Carmen, me and our watcher.

I lasted all of 30 seconds on her feet and then it was full gas to get back in her wake. I was powering through the water, working as hard as I could, and then I realized I was dropping my front arm. My new form had disintegrated back into old habits. “What am I doing?” I thought. “This is not the point.” I wasn’t swimming to prove anything, it wasn’t a race. This swim was an opportunity to put the week’s hard work together, to practice and feel my improvement. I stopped trying to catch up and eased into my own rhythm. “Relax. Easy arms. Elbow first. Patient hand. Catch. Hip drive. Kick.” In between groups, I was alone. And happy.

Corinne from non-swimmer to 5km in less than 9 months.

With only a few hundred meters left, our group guide on a stand-up paddle board came back to accompany me to the end. I popped my head up, “hello!” I said cheerfully. “You’re not tired?” he replied, shocked. “Nope!”. After months of being the weirdo barely moving in the slow lane practicing how to float and balance in the water, it was energizing to see and feel Total Immersion working. I knew I could swim 5km but I didn’t know I could swim it TI style, relaxed and easy. Turns out the right way in swimming isn’t the hard way. Effortless speed does exist.

Each group arrived one after the other to welcoming and smiling faces who, constantly scanning the water, excitedly pointed out anyone coming into view. Rapha, the real water baby of the group, personally swam the last 30 meters with each person. On shore, buzzing off our collective achievement that everyone had completed the swim, we swapped stories about the tough current at 4km where we all felt we were going backwards, the colourful fish and clear water, trying to keep our form in the waves, and how shirtless paddle boarders make the best guides. 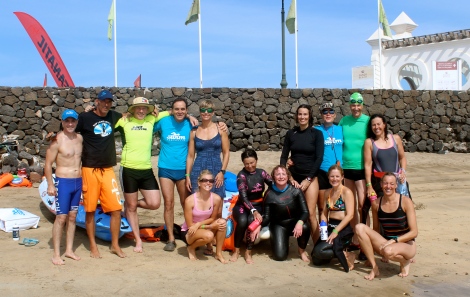 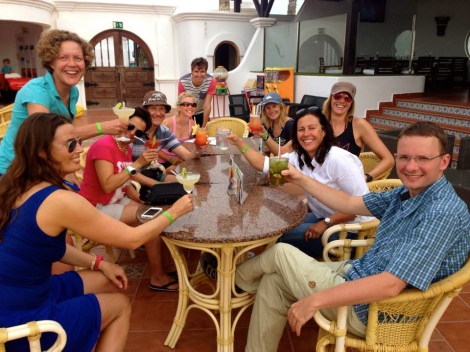 Even though the camp was officially over, early the next morning while the rest of the resort was sleeping, we all met for one last swim. True to TI form, the pool was almost still which was the ultimate sign of how far we had all come. There was no drills, no coaching, (almost) no old habits, just swimming. 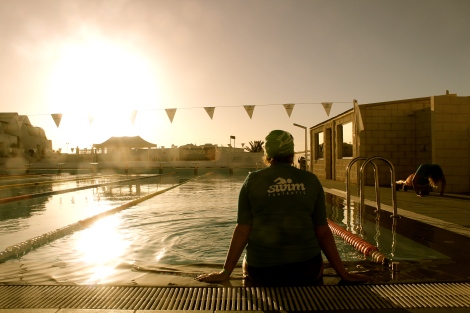