“Did I get ‘S’ because my name starts with an ‘S’?” I asked Edward, creating a blonde moment I would never live down.

“It’s a good start,” he replied, explaining how cyclists were grouped according to how good they were starting from A.

“What letter are you?”

At the next local cycling race in Cape Town with my “S” (not for Sarah) pinned to my cycling jersey, I anxiously walked down the serpentine line of alphabet signs and stood with the other “S” riders. I couldn’t even see Edward. I couldn’t even see F, H, or I! By the time I finished, starting almost 40 minutes behind Edward, most of the other riders at the event had finished and gone home, including all my teammates from the University of Cape Town Cycling Club. “S” sucked.

My first 100km and second participation race. It took me over 5 hours and my dad stayed beside me the whole time. He had no idea what he got me into…

I wanted a better seeding. “If I could just make it to ‘H’…,” I thought. I kept going to races on the weekends and in between I learned how to slipstream, that I needed to eat breakfast and what intervals were. I steadily improved, my seeding along with it, and just when I had been bumped up to ‘E’ batch, Edward told me that I was eligible to race elite so “it was time”.

“Elite?” my eyes widened with the hint of a nervous smile. My heart jumped into my throat because I realized he “told” me. I hate being out of my comfort zone and, knowing I would drag my feet only to eventually do it, he had gone ahead registered me as an elite for the next race–that weekend. On the start line, I felt incredibly out of place next to all the pro ladies in matching kit with gigantic quads and rightly so, I was dropped after only one kilometre.

I was frustrated after the race and, to be honest, a bit embarrassed. I knew it was going to be hard. I knew I was going to get dropped. “But one kilometre?” I whined to Edward. I remember exactly what he said back to me: “Would you rather be the first person in A batch or the last person in elite ladies? Being out of your depth is the best way to improve.” He was right. Staying in my comfort zone wouldn’t lead me anywhere. Racing with the elite ladies gave me the opportunity to get better so I stuck it out.

There were no letters in elite, there were podiums, and so I started climbing a new ladder. I was so out of my depth, though, that my marks of success were not podiums. My progress was solely judged on how long I could stay with the bunch. As soon as the start gun fired, I would just try to hang on for dear life. I got yelled a lot, crashed a lot, felt like I practically lived in the gutter and got dropped and dropped and dropped and dropped. A few races (perhaps more than a few) ended in tears but each weekend I held on for just a bit longer than I did before.

I’ll never forget how Emily stayed back after I crashed. 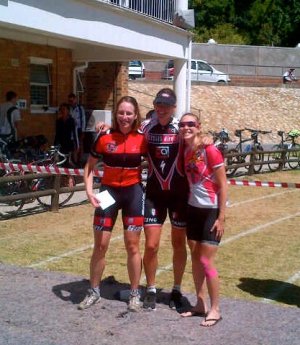 3rd place and my first podium.

Racing brought great people, like Annemie-mie, into my life. 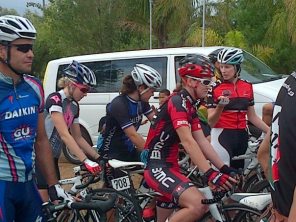 I don’t look nervous at all!

Fast forward to 2016 with two sport changes and one year of triathlon under my belt and I had a choice to make: would I rather be the first person in my age age group or the last person in elite? The answer is the same now as it was when I was cycling. I want to move forward and the only way to do that is to start from the bottom again; so, I happily terrified to announce that 2016 will be my first season racing as a professional triathlete. Not bad for a girl from “S” batch.

One response to ““S” Batch (and a BIG Announcement)”