My first pro race was awful. There, that’s the truth. I was nervous the week before but also quietly confident. I had a good prep and, despite a few acute concerns, figured I could meet my personal goals. I didn’t. It was a bad day from start to finish.

From the start canon, I got left behind. I started too slow and had no speed to make up the immediate gap that opened. I swam alone and the wind and waves helped the already growing gap grow even bigger. I had the worst swim I’ve ever done for 1.9km. 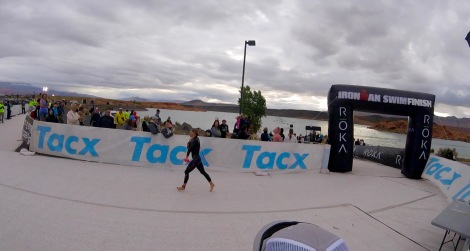 Into T1, I couldn’t hold back the tears. I easily found my bike since it was the last one on the pro-rack and managed to get going quickly. I spent the first 5-10minutes trying to get my power meter to work. I finally bailed on that idea and decided to ride by speed and put that swim behind me. As me legs warmed up, my power meter finally turned on but I was praying the calibration was off. Those weren’t the numbers I wanted to see.

The rain started lightly after about 10km but by 50km it was pouring. The rain didn’t bother me too much but the accompanying cold did. Somewhere I had lost my second bottle and when I grabbed an aid-station juice, my frozen hands might as well have been wearing oven mitts. I managed to pour half the bottle in my front canister before it slipped through the wet, frozen blocks I was trying to use as hands. Thank goodness it was just Snow Canyon left and then downhill to T2. 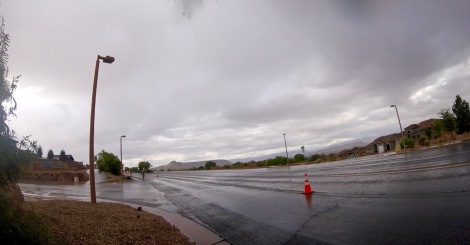 I was so excited to climb. I love climbing…when I have the legs. Snow Canyon was covered by black cloud and so was I. I just couldn’t hold my power and soon first gear felt like I was churning cement. When the hill was over, I turned to descend back to St. George on a water-soaked highway in torrential rain. I tucked in to try and make up some time, dodging the deeper puddles as much as I could.

By the time I got to town, I watched the other pro-ladies already running as I rode the opposite direction towards T2. It was depressing. I couldn’t believe I had to face 21.1km still. I reached down to get out of my shoes, barley able to pull the velcro straps off with my bright red ice-cold hands. I jumped off my bike onto frozen club feet and found my empty spot in transition, noticing I was still very much last. Some spectators laughed watching me try to unclip my helmet in vain. After almost a minute, I shoved my hands into my mouth to warm them a little and, with a combination of both hands, finally managed to get my helmet off. 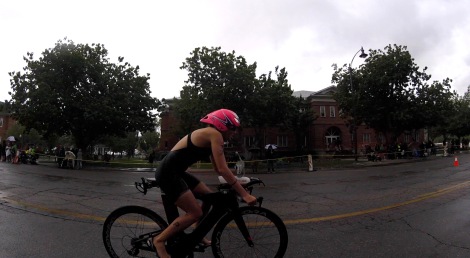 I took off running on feet that were so cold they felt asleep. The run course was uphill right away which wouldn’t typically bother me but my legs had checked out hours ago. Now with 90km in them, I was creeping. After only 3.5km in, the leading ladies passed me running to finish. 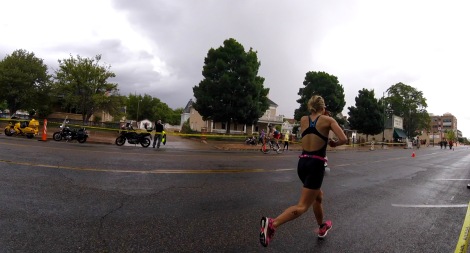 It was the longest run ever. My body was finished, I hadn’t eaten enough and the dream I had of at least nailing the run lasted less than a millisecond as I watched my speed touch paces I don’t even train at. Each hill-and there were many-seemed to sap my spirit even more. I wanted to walk. I wanted to stop. I wanted to cry. I wanted to quit triathlon all together.

I finally crossed the finish line, whole-heartedly disappointed and embarrassed by my time. I wasn’t that it was so hard, it was that I was capable of so much more. I finished stone last. It was a really hard knock.