I’m in a ball on the couch wrapped in my red fleece blanket that Edward bought me for €2 from a French supermarket. It’s a beautiful day outside and I can hear the waves crashing a mere 200 meters away. I close my eyes and snuggle closer to myself, fitting onto one couch cushion. I’m exhausted. It’s a rest day and my body simultaneously relaxes and succumbs to the past weeks and days of consistent training. It’s not a normal rest day, however, but what makes it abnormal is something that has become an ordinary task: it’s moving day. 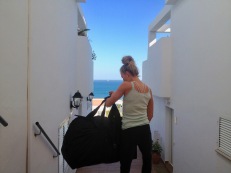 I’m in a new apartment, again. After packing up the station wagon, getting my new keys and lugging all my things from the car and down two flights of incredibly steep stairs, my body urges me to rest. When I close the door after bringing in the last load, I sit down on the couch and take it all in.

Surrounding me are all of mine and Edward’s belongings. There is one shopping bag with all of our documents; another bag for our shoes and helmets; there is a bag with my hair dryer, the make-up I hardly use and emergency post-crash bandages; a box of kitchen things; two heavy suitcases of clothes; and, of course, my two bikes. Although it all fits in the car—that’s the rule—, it feels like a lot and, yet, in the new apartment we are engulfed by foreign things. 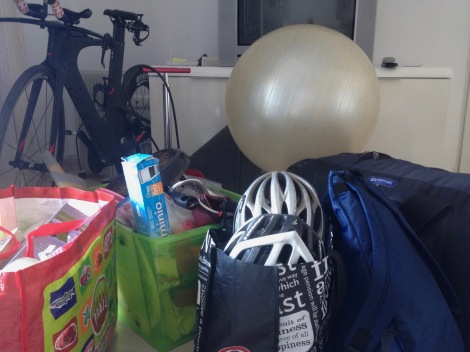 The main room of the apartment is cluttered by too many chairs—I count nine plus two couches and two stools. There are bright yellow fake flowers on the dinning table. There is a bidet in the bathroom (which always makes me cringe) and the cupboards are full of odd dishes and Tupperware long missing their lids. It’s clean, though, and one of the more modern places I’ve rented, despite the fat television with the bowed screen that reminds of the ones when I was little.

The best thing about the apartment is the balcony. I only saw pictures on the Internet before moving in and I’m glad it lives up to my expectations. The sea view is one I’ve always dreamed of having. Even from the couch where I’m half asleep, I can see the waves. I know I’ll stretch on the balcony after runs and nap el fresco on my yoga mat in the afternoon sun. I’m sure that will be the first new place that feels like home.

I’ve become very good at making a new place feel like home very quickly. I like to clean the house, get unpacked and into a routine as quickly as possible and, within a day or two, I typically feel settled. As a lump of exhausted flesh on the couch, however, my things stay spread out over the floor and the apartment remains a foreign space.

I don’t have the energy or the enthusiam I usually do to get settled as soon as possible. My body nags me to sleep but, with the chore ahead, I’m restless. Still, I can’t summon the energy to move and I roll over and tuck myself into my red blanket. Despite my alien environment, I’m comfortable cocooned in my little piece of stable familiarity. People tease me that it’s a security blanket. It even has the nickname “Linus,” referencing The Peanuts, but most people don’t know what it’s like to be on the constant move. Even most athletes have a home base somewhere but, since I haven’t been anywhere longer than 5 months in the past 5 years, that hasn’t been my experience. Home has become wherever I can feel settled and right now, on the couch in the house that I’ve lived in for 4 hours, the only thing that feels like home is my €2 supermarket red fleece blanket.

Chasing pavements.
There is always darkness. But there is always light. #findthelight #choosegratitude
It took 6 months to go from a 30 second jog to a 30 minute run. #635days #caraccidentcomeback Thanks to all the coaches, physios, trainers, massage therapists, friends, and family who have held my hand and kept me positive. 📷 @jamesmitchell5
Plank in the bank.
Lookout. 📷 @jamesmitchell5
Mash up. #yoga #rehab #hiplabraltear