“A sign!” I sang out loud in a melodic mix of relief and excitement. I wasn’t really, truly lost. Every now and then I could see the tree-cleared ski run on the mountain next to me.  I could hear a river. I had drawn a mental map and I was still kind of moving in, what I thought, was the right direction. I could always back-track too. Still, I felt so elated I hugged the wooden post. Thinking you’re on the right track is a whole different experience than knowing you’re on the right track. 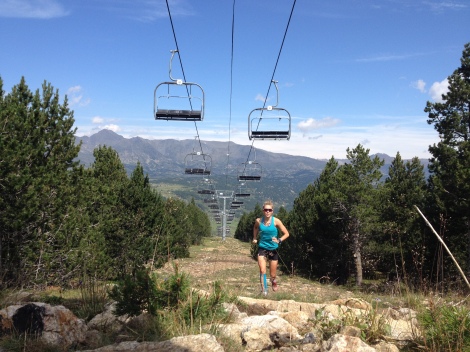 Thirty minutes earlier I was standing at 2215m. I had run up to Roc de la Calme, the highest peak of the Font Romeu ski resort that I could run to. I lingered at the top, feeling quite proud my three week injury-induced run hiatus was officially over. I marinated in the view but as I turned to run home, I was faced with a fork in the trail. Right, back down the way I came. Or left… Left, I figured, I would go down and around, joining back half way back where I had come from. “Hmmm….decisions, decisions.” My feet turned left and the rest of my body followed while my brain was still making a list of pros and cons. 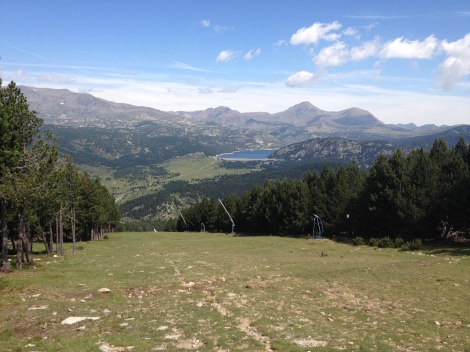 Down a black-diamond run I staggered, stepping sideways to handle the gradient, dipping in and out of the single track on the side of the main ski run. I started to question my decision. I glanced back up where I had just come from, knowing I would practically have to crawl up the slope if I changed my mind. I looked out at the magnificent mountain panorama inviting me to continue and recommitted. Eventually I slid (literally) on to a dirt road that brought me to a marshy grass path. After I gingerly Mission-Impossibled through an electric cattle fence, there, seemingly out of no where was a lake.

I ran along the shore, jumping puddles here and there where the lake had spilled over, until the trail split. Left I went again, compelled by curiosity to feel the temperature of the water. It was surprisingly warm. 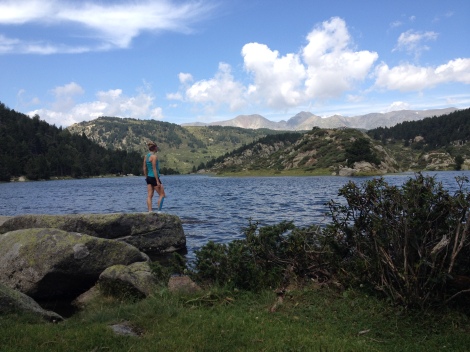 I continued to follow the narrow trail next to the lake. The trail was technical with rocky downhills, long sections of slippery tree roots, and the occasional scamper up rocks to dodge a flooded section. Eventually, I reached the top of the lake and, standing on a mad-made wooden bridge over an escaping stream, found myself eye level with the lake. From there, there was only one path so I followed it.

“Why does this keep going left? And down?” I worried. My mental GPS was repeatedly telling me I needed to go right. It was also starting to suggest I “make a u-turn at the next legal opportunity”. I stopped, needing a moment to figure out whether I should keep trekking down the 13% eroded rocky path or back track. I tilted my neck up the hill to look at what I would have to climb. I looked down at the technical path ahead. I looked at my cell phone, no service. I reached in my pocket for my emergency gel and down I went.

My easy 60 minute run had come and gone. This was an adventure trail run now. Given the state of the path I was on now, the trail had come and gone too. I pushed on, no longer looking at the scenery but looking for a sign, a landmark, anything.

Ten (but what seemed like 30 minutes) later, I rounded a corner and squinted. It was either the sign-iest looking tree in the world or a sign. I got closer and it was a sign! I was so happy I sang out loud, figuring no one was around for miles. I hugged the post. I didn’t know the exact places the sign pointed to but they pointed to somewhere and that’s where I was going.